Activity based costing (ABC) is an accounting methodology that assigns costs to activities rather than products or services. This enables resources and overhead costs to be more accurately assigned to the products and the services that consume them. ABC is a systematic, cause-and-effect method of assigning the cost of activities of products, services, customers, or any cost object.

ABC is based on the principle that ‘prod­ucts consume activities.’ Traditional cost systems allocate costs based on direct labour, material costs, revenue or other simplistic methods. As a result, traditional systems tend to over-cost high volume products, services, and customers; and under-cost low volume.

Conventional costing systems are built on the assumption that product drives the costs directly. ABC system drives indirect and support expenses, first to the activities and processes and then to products, services, and customers, giving managers a clearer pic­ture of economics of their operations and services.

Activities can be defined as a named pro­cess, function, or task that occurs over time and has recognized results. Activities use up assigned resources to produce products and services. Inputs are transformed into outputs under the parameters set by controls performed by the organization’s employees and their tools.

Activities can be perceived as consumers of resources in production of materials, services, events, or information. Ac­tivities are the common denominator between business process improvement and informa­tion improvement.

Cost accounting centers around recognizing and reporting costs in different ways. Accountants use different costing methods to meet different financial-reporting goals, such as deferring expenses until future periods or maximizing reported net income. Functional-based and activity-based cost accounting offer two fundamentally different frameworks for recognizing and reporting company expenses. Neither system is better than the other in every situation. Rather, the ideal costing system to use depends on your company’s financial situation and cash-flow and reporting goals.

Activity-Based Costing
Activity-based costing (ABC) allocates expenses based on activities performed. Rather than adding all costs incurred in a single department, ABC breaks departmental workflows down into component tasks. Activity-based costing considers both resource drivers, such as the time and space required for each task, as well as activity drivers, such as the number of units produced or customers served, to determine the cost-efficiency of different activities. The ABC system pegs overhead costs directly to specific activities based on the actual amount of each fixed expense they incur. If an activity requires 10 hours of electricity, for example, accountants can easily determine an exact amount of electric utility expense incurred by the activity.

Advantages
Activity-based costing can be advantageous when analyzing the profitability or income contribution of different activities in an organization. A company can use activity-based cost figures to compare the cost of performing certain functions in-house, like shipping logistics, to the cost of outsourcing the activity.

Functional-based costing can be better-suited to providing big-picture overviews of company expenses. Functional-based cost data can reveal whether a company is generally proficient or poor at managing its expenses, which can be more useful for short-term investors.

Disadvantages
Activity-based costing can be more time-consuming and prone to human error than functional-based costing. In order to determine the cost of single activity, accountants must consider compensation costs, materials costs and overhead costs to come up with a single activity cost, tripling the amount of research required. 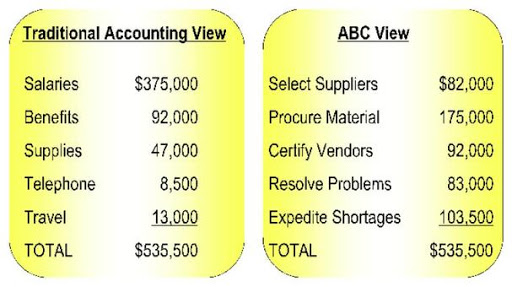